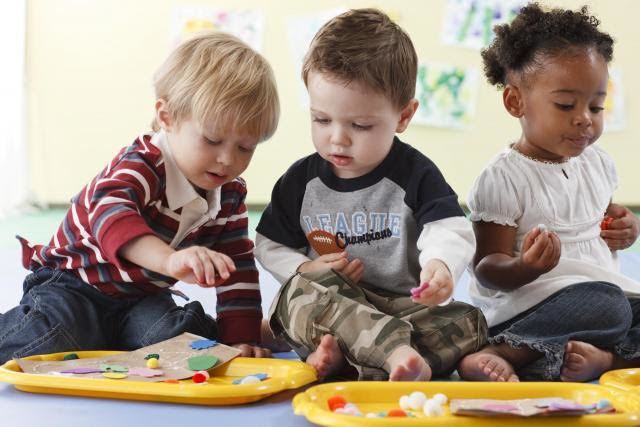 Hey everyone! Today I wanted to tell you a little bit about the stages of play. Play development is super important as it is a foundation for later social skills. Below are the stages that play develops from with its typical age ranges. However, it is really important to think about where your client's skills are at and model and create goals on play accordingly.

When babies are born, they often begin play by exploring how their bodies move which is calledunoccupied play(0-3) months.

The next stage of play issolitary playorindependent play(6 months-2 years). This is the stage where children begin to play alone with toys for extended periods of times. It is important to think about the variety of toys a child plays with. Some kids will play functionally with one toy, but they are limited in the variety of toys they play with. For children who have limited attention to toys, it is important to slowly increase the demand and time expected for them to play with the toy. For example, a child who is learning to engage and play with cars on a car ramp should not be expected to sit and play for 5 minutes, as that makes the task not rewarding. It is okay to make a goal for 30 seconds of functional play (given a model or independent) and work your way up in the length of time you want them to play. Examples of toys for kids to play with independently include:

Considerations for these toys include fine motor movement, attention, motivation, and trunk support. For kids that have a hard time with a grasp, may have a harder time coloring due to the fine motor control that play skill takes. If your child has difficulty grasping items, reach out to an occupational therapist. For kids that have limited trunk support, think about placing them in a chair or position where that will support their body. If their body is not supported, playing with toys becomes even harder.

Signs your child is moving into the next stage of play include functionally playing with a variety of toys for 5+minutes at a time and beginning to observe other kids playing around them.

The next stage of play isparallel play(2+ years). Parallel play is when a kid is playing directly next to a kid, but they may be playing different toys. An example of this would be a kid playing cars and a kid playing blocks right next to each other.Signs your client is moving into the next stage of play is when they begin to show interest in items other kids are playing with.

Cooperative Play(ages 4+ years) is when children begin to play together and engage in the same play scheme. This may look like two kid building a tower together. Considerations with cooperative play to think about include:

Symbolic playis when children use objects to pretend they are something else. This develops around 8 months-18 months of age. Symbolic play leads into pretend play. Examples of symbolic play include:

It is important to model these with your children if they are not engaging in symbolic play, even if your child can or cannot imitate.